Form cannot be submitted until required fields are completed and reCAPTCHA checkbox has been checked.

There’s nothing much worse than tossing and turning in bed, unable to fall asleep. For those living with tinnitus, the battle to get a good night’s sleep can be a daily occurrence. Described as a constant annoying ringing in one’s ears that may also appear as screeching, rushing, or whooshing sounds, tinnitus affects around 32% of the U.S. population, according to Marshfield Clinic. No matter the sound that’s constantly bellowing through your ears, good sleep can be a hard to come by commodity for those suffering from tinnitus. Although there is no cure for this issue, understanding how tinnitus affects sleep and learning about treatments can bring some relief.

More about Tinnitus and How It Can Affect Sleep 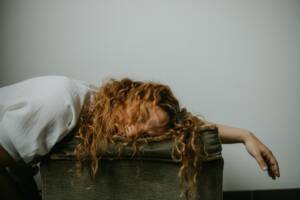 Tinnitus isn’t a one-size-fits-all issue. Each case is unique and could have many possible causes. Although the most common factors that cause tinnitus are hearing loss and noise exposure, it can also be caused by ear infections, some medications, and heart disease, among other causes. One of the main issues with tinnitus is its effect on sleep. Often, a vicious cycle starts: Being tired can lead to worsening tinnitus, which can lead to even more difficulty sleeping. According to the National Library of Medicine, this lack of sleep can then start producing poor health outcomes such as cognitive and cardiovascular issues, making it that much more important to learn how to sleep with tinnitus.

Steps to Sleeping Better with Tinnitus

Even though there is no cure for tinnitus, there are still steps you can take to get a better night’s sleep. One of the most common ways to find better sleep is through “sound masking.” This can include everything from using a white noise machine to turning on a noisy fan while you sleep. By distracting your brain with other noises, you can make the ringing subside, giving yourself the rest you deserve.

Other tricks to sleeping better with tinnitus:

While the above techniques can bring some relief, the first step in your tinnitus treatment should be visiting an audiologist. The trusted professionals at Associated Hearing Professionals have years of experience bringing the best possible hearing care to St. Louis and its surrounding areas. To learn more about tinnitus relief, contact us today.

Our Audiologists have a total combined 70 years of experience in bringing the best possible hearing care to the St. Louis, MO Metropolitan area.
Read More »

Associated Hearing Professionals view your hearing health as part of your overall healthcare. Hearing loss is associated with many other health conditions, including cardiovascular disease, diabetes, depression, and dementia.

Our offices are both open and we are practicing guidelines recommended by the CDC for the health and safety of our patients and staff. Please contact us at 636-778-9232 or mail@HearSTL.com with any questions you should have.